I have been in Barcelona over a week now and really do like this place. As someone who works from cafes, it’s very hard to beat working from here. Aside from work, there is always something going on here and I love the energy of the city. It’s probably my favourite city in Europe, closely followed by Porto and Budapest.

I could have flown down to Seville, indeed it would have been faster and cheaper, but there is an allure to train travel. I would have ended up on Ryanair too!

The Spanish rail system is world class and the journey is only going to take around five and a half hours. That gives me the opportunity to finish a book that’s been lingering on my Kindle for too long! 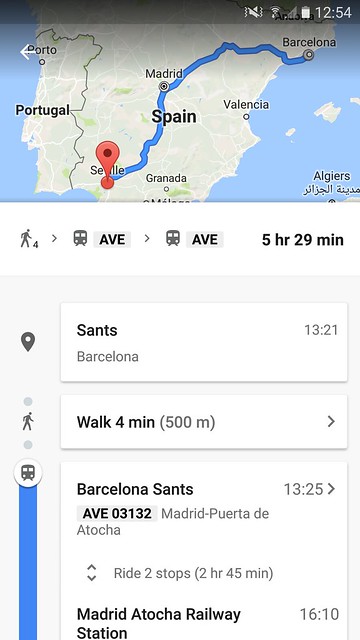 In terms of my preparation, I have been walking quite a lot and breaking in my new Salomon walking shoes. On the Camino Frances  I moaned a bit about the Salomons I wore as they split after such a short time walking (after only two weeks!).

To be fair they were more for trail running rather than long distance hiking and I did get a full refund from the awesome Cotswold Outdoors in the UK.

Below is a link to the pair I am going to be walking in, also purchased from Cotswolds.

I will talk more about walking shoes and my feet in a future post when I will go into more detail about my equipment.

Yesterday I had a lovely stroll around the city and along the beach. It was warm rather than being hot, but that did n’t stop many people stripping off on the sand (from the skin tone and beers I am assuming many were British or Irish).